The Love Letter is an action game originally created for the Ludum Dare 22 game jam[1] in December. It was featured on Pixel Love on April 29, 2013. The game concerns a schoolboy who receives a letter from a secret admirer, with the goal of reading the letter before class starts.

At the start of the game, the player's character appears on screen in front of a red door, running late for school. He reaches his locker to find a letter with a heart on it asking him to read it before the second period bell. When he finishes the introduction, the bell rings as a warning that second period will begin in five minutes. Students start exiting out of their classrooms, wandering and chatting in the area. The player then has to guide the schoolboy around so he can finish reading the letter without getting caught by the other students.

By clicking and holding the mouse or pressing the spacebar, the message of the letter scrolls up on screen. The letter can be put down immediately when another classmate approaches the schoolboy. It will resume in the last spot the player had stopped reading at.

The letter is the main objective of The Love Letter. The schoolboy must finish reading it without getting caught by his fellow classmates.

As the player clicks and holds the mouse button or presses the spacebar, the text of the letter appears in white against a dark background, occupying the middle section of the screen. Three full lines are seen at once on the screen.

The schoolboy's classmates wander the halls and hang out near lockers, chatting to each other. When they see the schoolboy, they will follow and try to talk to him. If they see the letter, one of them will snatch it from the schoolboy and start to read it. As the schoolboy protests, the classmate will respond with an "OMG", followed by a "LOL" speech bubble. The schoolboy blushes from embarassment and game fades away to the start screen. If the player chooses to start the game again after getting caught, it will resume from the point when the warning bell rings.

The schoolboy can push against any classmate to move them out of the way. If he is far enough away from the classmates, they will stop following him and instead talk amongst each other. If the schoolboy waits in one spot for a while, a crowd of classmates will approach him and stop near the same position he does. If the player moves him, the will try to follow him until he is out of range.

A line of classmates 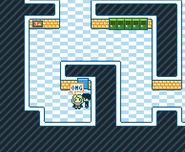 A classmate reads the love letter

One of the lockers may open spontaneously during game play, if the schoolboy stays near one for too long. When the locker opens, it reveals a white cat that exits and starts wandering the hallway. The cat will constantly walk around the area without stopping. Other students cannot walk past the cat.

The school bell is never seen but heard twice in the game. The first bell signals the end of the first period. The second bell rings once the player finishes reading the letter or time runs out. If time runs out, the classmates leave and the schoolboy cries, "Oh now! I've waited too long! Now I'll never know who the letter is from!"

When the bell rings, it lets out a high-pitched sound and vibrates the hallways.

The Love Letter's Soundtrack consists of two music tracks. The main theme plays from the start of the game, and the letter theme plays whenever the player holds down the left mouse button.

The Love Letter was originally submitted for Ludum Dare Jam 22, in the theme "Alone". The game was developed using Flash Develop and Flixel[2] It was not possible to win the game at the time of its release for the Jam,[3] but basic assets of the game, including music and a timer, managed to make it into the game within the time limit.

About two months after its initial Ludum Dare release, a completely playable version of The Love Letter was released on February 14, 2012.[4]

Community content is available under CC-BY-SA unless otherwise noted.