Pause Ahead is an action-platformer released by Askiisoft on August 20, 2013. It was featured on Pixel Love on January 6, 2014. The player controls a character trying to escape from an unknown dark place. Along the way, they are taunted by an overseeing narrator.

There are twenty-four levels in Pause Ahead, excluding any secrets. The player must get to the protagonist to enter the door before time runs out. Five levels in to the game, the player is introduced to the pause mechanic, which preserves the character's momentum until the the pause button is let go of, or the protagonist hits a wall. The pause mechanic also allows the protagonist to travel through hazards, but it does not allow free movement. At the end of each level, a HUD screen shows the player all their previous attempts simultaneously.

When Pause Ahead was released, levels were only saved from the most current unlocked. A level select screen was later added, allowing players to start from any level they had previously unlocked after clicking "Continue"[2]. Hovering over a level icon displays a part of the level's in-game text at the bottom of the screen.

Level 1: I awake in a dark place

This level has three steps leading to the door. The player is instructed on how to jump and interact with doors to complete the level. To complete this level, the protagonist can jump up the stairs to the door. A time limit of twenty seconds is given on the clock.

Level 2: At least I'm not coming this way again

The player is given twenty-five seconds to complete this level. Spikes are introduced to the game, and appear sparsely along the ground. The protagonist must fall off the ledge, then jump up the three floating platforms to get the to the door while avoiding the spikes.

The game introduces self-moving saws. One saw is contained in a shallow pit, of which there are two in total. The protagonist should land in these pits while avoiding the saws as well as the spikes that are placed to the left and right of the first pit. After avoiding the second saw encountered, the door can be reached on the next ledge.

Level 4: Whoever thought to keep me here...

Level 5: Bridging this gap will require some rest

Level 6: Time and space in this place is an illusion

Level 8: All this commotion to bar my path...

Level 11: You are merely a rat in maze

Level 13: You must expect a reward at the end of this journey...

Level 15: Who is your puppeteer?

Level 17: Your time is drawing near

Level 19: You cannot be here

Pause Ahead, titled as "Pause ahead", was originally created for MolyJam 2012 based on a tweet that suggested using the pause button as a weapon[3]. It was available for download on Windows; the original game was made with Game Maker and released after forty-eight hours of development. Due to the time limit, much of Pause ahead's gameplay and design were based off of Tower of Heaven's[4]. On April 3, 2012, Askiisoft uploaded a gameplay video of Pause ahead.

The game later went onto further development to be re-released in Flash. Changes were made to the dialogue as well as the appearance of the main character and some other elements. Levels that were created in the Jam version were reused in the Flash. 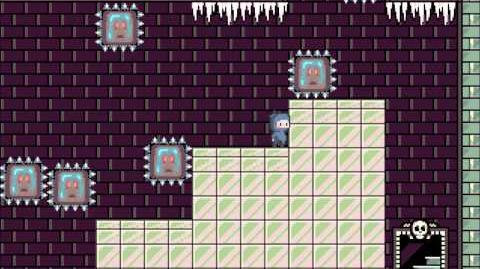 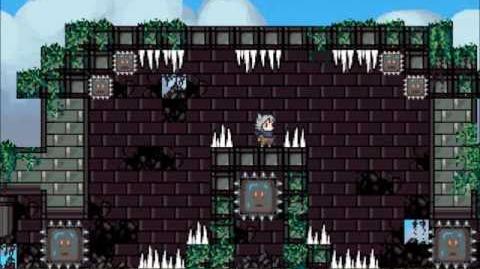 Pause Ahead - Flash trailer
Add a photo to this gallery

The main music of Pause Ahead is composed by Bill Kiley, available on Bandcamp as "Pause Ahead OST Side A". A separate album for "Side B" contains the music for a hidden unlockable area of Pause Ahead composed by Flashygoodness. The complete soundtrack is also available on Loudr with a minimum price of $5 CDN. Unlike Bandcamp, the tracks are ordered by their appearance in-game.

Retrieved from "https://nitromepixellove.fandom.com/wiki/Pause_Ahead?oldid=12536"
Community content is available under CC-BY-SA unless otherwise noted.