Bump is a puzzle turn-based platformer developed by Aaron Steed for the 7 Day Roguelike Challenge. It was featured on Pixel Love the Monday of March 18, 2013. The goal of the game is to get the highest score by bumping into objects without dying.

Controls use the letter keys, and letter R to restart the game.

Bump sets players in a randomly generated level, where they navigate the character and "bump" objects in order to obtain the most points. Each turn or movement made by the character decreases the time counter by one. The character dies, causing a game over, when it makes contact with a hazardous object, falls off the edge of the screen or runs out of "time". Points in Bump can be obtained by bumping into certain objects and destroying blocks.

The character can "bump" into these blocks to destroy them with hazards or earn some points. 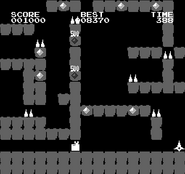 Some bomb blocks exploding where the character has hit one. 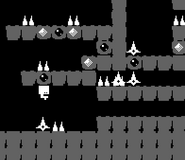 A set of bomb blocks, marked by black circles.

Spikes rest on the top of some block columns, as well as on the ground. They are not harmful to the character unless the spikes land on the character, or the character descends from the air onto the spikes. The character must be in line with the ground of spikes if they are to cross it without dying.

If a column of blocks is hit from below, any spikes at the top will point downwards and move one space downwards for every turn made by the player. The hazards destroy every block in their path, including any blocks below. Causing hazards to descend scores the player 100 points, plus 10 points for every additional block destroyed.

Spike stars are the second hazards encountered in Bump. They have one thin, pointed top and three protruding corners at the bottom. A small, black cross shape marks them near the bottom.

The main character of Bump is white, with a square head, two tiny black eyes and a thin body with two visible legs. The character moves by turning on its head and landing upright on the adjacent block.

Bumping is the character's main ability. With the jump keys, the player can have the character "bump" into columns to earn points. It is able to jump four spaces up before landing upside down in midair.

The character is vulnerable to hazards, and will die if contact is made with them. Spikes, for instance, can only be crossed if the character is on the same line as the spikes are. Spike stars, however, must be avoided and cause instant death on any contact. 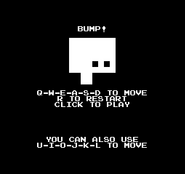 The character upside down on the bottom of a grey block

The character after hitting a hazard

Retrieved from "https://nitromepixellove.fandom.com/wiki/Bump?oldid=11159"
Community content is available under CC-BY-SA unless otherwise noted.